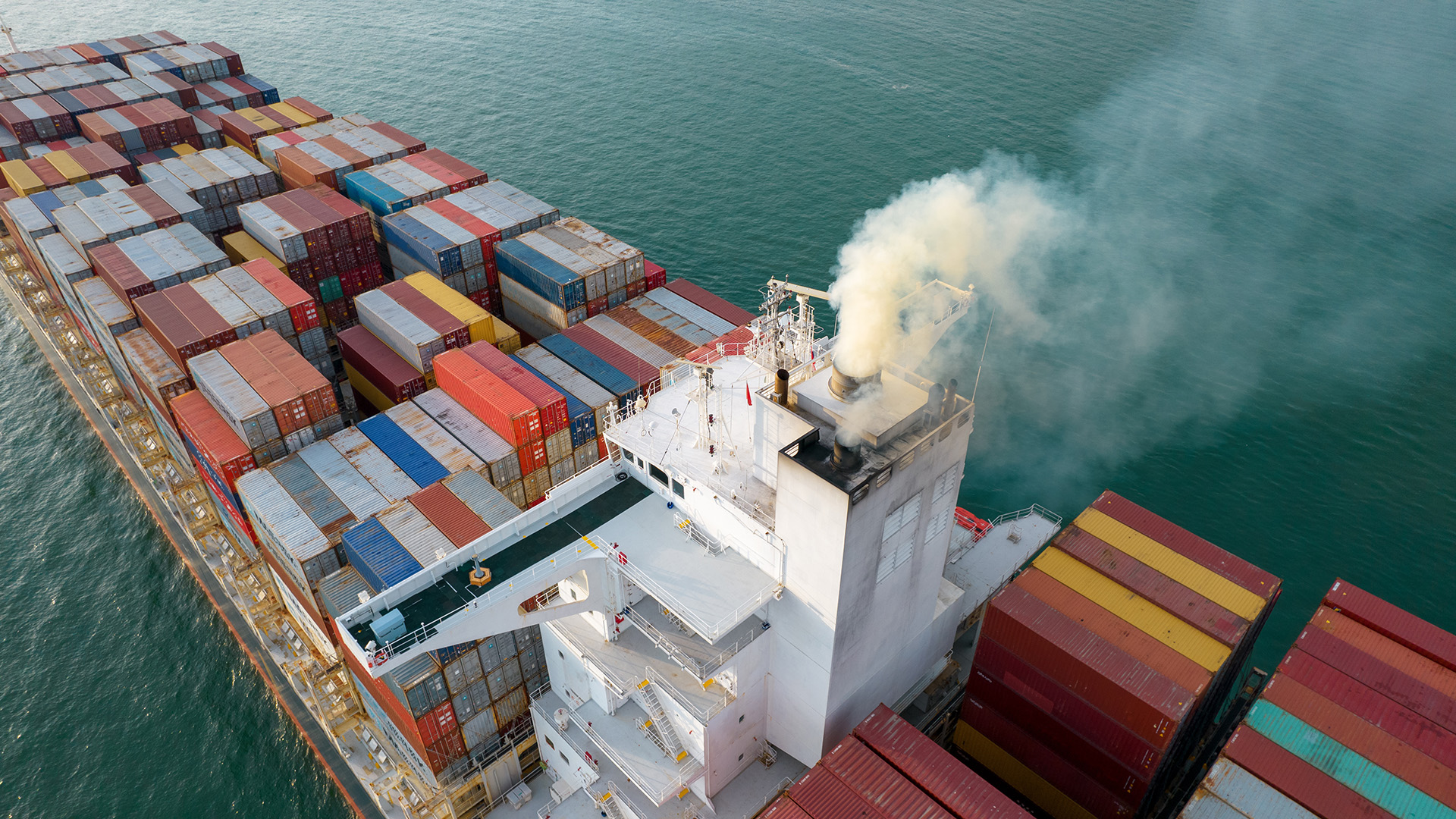 
Rapidly detecting the first signs of a leak from a marine scrubber exhaust system.

Exhaust Gas Cleaning Systems (EGCS) or scrubbers are an integral part of ships that ensure toxic sulfur is removed from exhaust gasses. Without this treatment, sulfur dioxide and other particulates can cause damaging levels of air pollution harming marine environments and human health. Scrubbers usually pass this exhaust gas through a large amount of seawater, drawn in through the ship, to neutralize acidic components before releasing the treated water.

The high acidity and temperatures of exhaust gasses accelerate the rate of corrosion that can happen throughout the scrubber which can cost up to $100,000 per year in maintenance and repairs [ref]. Small leaks can lead to catastrophic floods into the critical areas of a ship, threatening the ship’s operation [ref]. Existing damage inspection methods are very manual and require specialist equipment, meaning checks are infrequent. Leak detection is furthermore difficult due to the cramped nature of scrubber chambers and their respective pipe network. A thin, adaptable and accurate sensor is needed to detect the first signs of a scrubber leak. 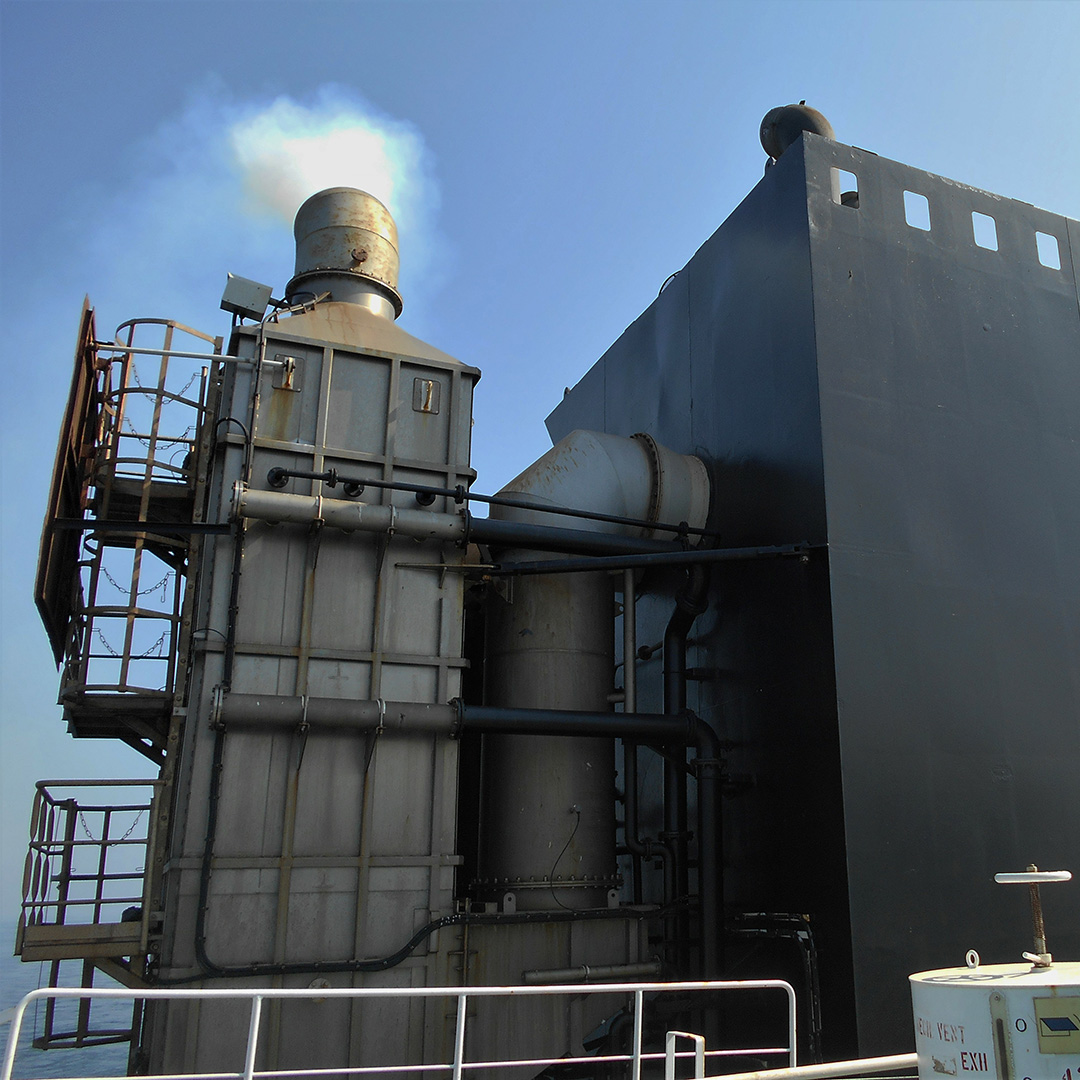 Sulfur oxides from marine exhausts have always been a major concern due to their adverse impacts on human health namely asthma, pulmonary, cardiovascular and respiratory diseases [ref]. In 2016, it was forecasted that without a reduction in sulfur oxide emissions from ships, this would cause 570,000 premature deaths globally between 2020-2025 [ref].

Therefore, since 2020 there have been several sets of regulations limiting sulfur oxide emissions, where the most notable has been from the IMO 2020 Sulfur Cap [ref]. Limits on sulfur emissions have seen a significant increase in the demand and installation of exhaust scrubbers as in the first year of the cap 4,000 scrubbers were installed [ref]. Continued government regulations calling for sulfur emission reduction are forecasted to drive the global marine scrubber market [ref].

The marine scrubber market can be segmented by operating type whether open-loop, closed-loop or hybrid [ref]. Open-loop scrubbers, as the most common, draw volumes of surrounding seawater to dissolve and neutralize pollutants. This wash water is then optionally treated to be discharged back to sea. Closed-loop scrubbers only use treated water onboard which is then recycled after sulfur reactions via an extra cleaning process. Hybrid scrubbers interchange between both systems to cater for protected regions that prohibit open-loop scrubber discharge. As well as operating type, the scrubber system can vary in size from 1 to 5 m diameter chambers depending on the ship and fuel type [ref].

The Problem: Highly Corrosive Ingredients Whilst Pumping 100,000 Gallons of Water Every Hour

Marine scrubbers must sufficiently dissolve the exhaust gas which requires a lot of mechanical effort to spray and disperse water [ref]. Open-loop systems further require a much higher volume of water as it contains fewer alkali components to balance the acidic sulfur oxides. These systems can draw and release up to 100,000 gallons of seawater per hour [ref] emphasizing the constant mechanical wear. Finally, the high acidity and temperatures of the exhausts create an extremely corrosive environment that increases the likelihood of scrubber damage.

Weak Points on a Scrubber

Protective coatings and durable materials such as glass-reinforced epoxy (GRE) have been adopted to ensure piping and machinery are durable enough. However, the final integrity of the scrubber can vary due to the workmanship of welded joints and coating applications. GRE pipes have also been seen to crack and disconnect due to pressure build-up. One repeatedly reported area of weakness is the overboard outlet [ref] where wash water is discharged out of the ship. Failure of any components around this area can lead to significant in-vessel leaking because of the vast quantities of water circulating the ship.

Ship leaks can be a life-threatening situation especially if leaks occur in the engine room; but manageable floods can disrupt ship operations, delaying cargo and other economic activities. Authorities such as Singapore’s Maritime and Port Authority (MPA) have therefore issued guidance [ref] on scrubber inspection, advising six-month inspections to critical areas of the scrubber via ultrasonic thickness gauging. This method non-destructively measures the wall thickness of pipes so thinning can be reported as an area to repair.

The disadvantage with thickness gauging over a large system like scrubbers is that it can be tedious and may miss obscured areas that are not accessible by a technician. The infrequent inspections also mean leaks can be missed and develop into much larger incidents onboard.

Alongside the manual processes of thickness gauging, acoustic and thermal imaging methods can provide a larger picture of the system rather than particular points. In contrast, automatic sensing methods such as Senmatic’s temperature sensor [ref] eradicate the need for specialist intensive equipment and inspections. This sensor can measure the temperature of pipes and structures of a scrubber to notify if any abnormal patterns need seeing to. Even though sensing temperature can be a good indicator of fault, this still may miss mechanical failures leading to water leaks.

Marine water leak detectors are mostly small-scale puck water detectors [ref, ref, ref] so are not suitable for large ships where scrubbers are used. Water leak detectors from other industries could be adapted to detect scrubber leaks. Firstly, flowmeter-type water leak sensors can be installed within pipework to flag abnormalities in flow rate and pressure [ref]. Scrubbers, however, have irregular flow rates, to begin with, and a single flow meter may not be sufficient for the whole system, not to mention the challenge of installing these into the pipework. Next, water sensing cables [ref] could be easier to install over larger areas of the scrubber floor or on pipes; but if deployed at the scale of a scrubber room, this may not be cost-effective. There is yet a sensor that is easy-to-install, scalable and accurate enough to detect the first signs of an exhaust scrubber leak.

LAIIER has addressed these challenges by creating a thin, flexible sensor that can be installed like a sticker to detect the first drops of a leak. The use of printed electronics means that the sensor can be economically scaled to cover small or wide areas- perfect for the variety of tight pipework and floor spaces surrounding scrubber chambers.

Once installed, LAIIER’s LoRaWAN leak detectors will automatically notify ship operators of any leaks through our Surface to Cloud™ platform. This innovative and power-efficient communication network means that battery life can span years minimizing maintenance and installation costs. 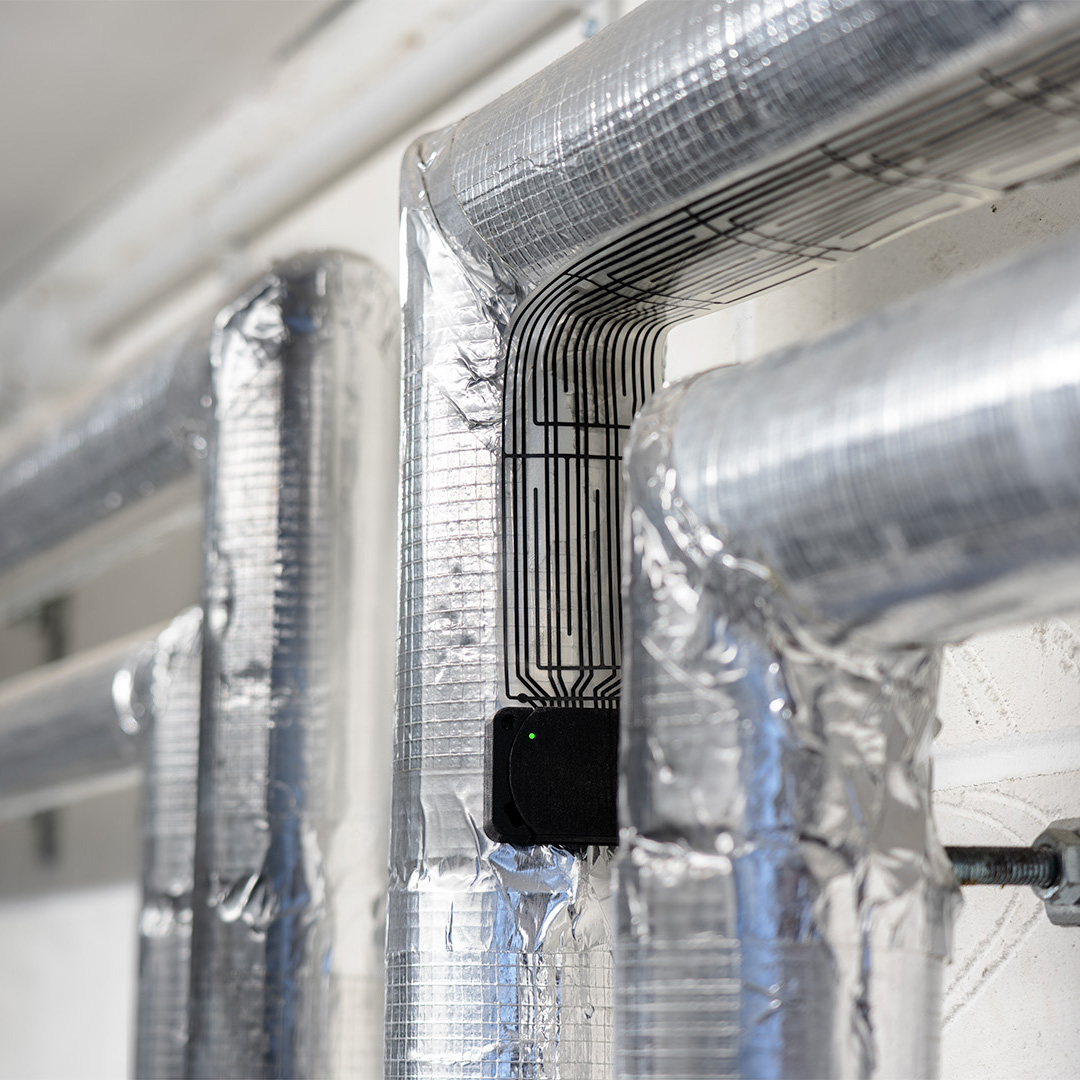 With the scale and complexity of ship vessels, marine insurance is a given among ship owners. In the case of exhaust scrubber leaks, damage can cause human injury, damage to operating equipment and furthermore delay cargo being transported which altogether amounts to an expensive risk insurer must consider. By providing their customers with LAIIER’s LoRaWAN water leak detectors, this can prevent the chance of severe leaks from developing, de-risking potentially large payouts and ensuring policymakers can better predict risks in the future.

Scrubber maintenance can be a manual inspection process which is why corrosion can go undetected for long periods worsening the extent of the leak. Ship operators and engineers, therefore, have a large responsibility to monitor equipment like this, which could be simplified with LAIIERs automatic sensing. Ship operators would especially benefit from early detection as scrubbing systems are usually connected to multiple sources around the ship including engine rooms, auxiliary engines and boilers [ref].

Key marine scrubber market players recognize scrubbers will be an essential component within future vessels- especially considering the progressive IMO sulfur cap restrictions. Providing scrubbing solutions that consider long-term use and maintenance can guarantee customers that scrubbing will be done to legislation standards whilst also protecting them from water leak damage.

Marine exhaust scrubbers are an integral part of ships to reduce their sulfur emissions and are becoming a necessary requirement enforced by international laws. Despite their great purpose of reducing pollution, scrubbers can be a fragile system regarding the high temperatures, acidity and volume of seawater being pumped through. Any delay in spotting leaks caused by corrosion can lead to uncontrollable flooding as well as insufficient scrubbing. LAIIER’s Severn sensors are an ideal solution to detect the first drops of a leak. Our flexible and easy-to-install sensors mean that issues can be detected and reported immediately to crew members.